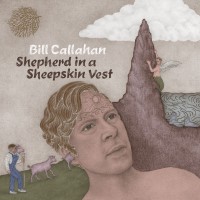 As you listen to Shepherd In a Sheepskin Vest, a feeling of totality, of completeness, steals over you, like a thief in broad daylight. Of course it does – you’re listening to a new Bill Callahan record! The first one in almost six years! What more do you need to complete you?

Or perhaps, after all the time, the obvious needs to be made just a little more explicit?

First, it’s a different kind of record. Bill’s now writing from somewhere beyond his Eagle-Apocalypse-River headspace, and Shepherd In a Sheepskin Vest is very much its own beast. The songs are, by and large, shorter, and there are more of them. It took almost all of the previous three albums to add up to that many. Plus, twenty’s a lot of songs! But again, it goes a lot deeper than that.

After Dream River, Bill’s life went through some changes. Good changes – marriage and a kid - but afterwards, it was suddenly harder for him to find the place where the songs came, to make him and these new experiences over again into something to sing. His songs have always been elusive, landing lightly between character study and autobiography, as the singer-songwriter often does. This felt different, though. After 20 years of putting music first, he wasn’t prepared to go away from it completely. Or was he? The lives of a newlywed, a new parent, they have so much in them – but writing and singing, it was his old friend that had helped him along to this place where he’d so happily arrived. Was there room for everybody? While sorting it all out, he worked on songs every day – which meant that for a while, there were lots of days simply confronting the void, as he measured this new life against the ones he’d previously known.

It informed the shape of the album. Moving gradually from reflections upon the old days in “Ballad of The Hulk” and “Young Icarus” to the immediacy of the present moment in “Watching Me Get Married” and “Son of the Sea”, Bill traces the different life lines, casually unwinding knotty contradictions and ambiguities with an arresting stillness. The sense of a life thunderstruck by change infuses Shepherd In a Sheepskin Vest– the songs wander from expressions of newfound joy and great contentment to other snapshots, considerations of the not-joy that we all know. Unsettling dream-images and mythic recollections are patiently received; the undertow of the past is resisted, pulling against it instead into the present, accepting revolutions of time and the unconscious as a natural flow.

These transcendent expressions are wedded translucently to the music. Acknowledging the uncertainty in which the songs were assembled, Bill went to the studio alone, unsure if he could find what he was looking for with a band riding along – because who knew how long it would take? This allowed the fluidity of his song-thoughts to be laid down with the right feeling. Once there was guitar and vocals, the other parts came. Matt Kinsey’s guitar partnership is an essential relationship within the music, as is Brian Beattie’s acoustic bass – but also, Bill found himself overdubbing parts himself for the first time in many years, which lent the songs an episodic drift, as if he’s passing through rooms while singing.

In it’s final mix, Shepherd In a Sheepskin Vest glows incandescent – an entirely acoustic arrangement, sounds and stories shifting seamlessly, almost like one big song made of a bunch of new stories – the kind that only Bill Callahan thinks to sing.

It’s a joy to hear from this old friend – informing all the lives that we’ve led in the hearing. Good listeners and tired dancers, sing along.

Barry says: Say what you will about Bill, but he sure knows how to keep writing the tunes doesn't he? A beautiful mix of brittle jazzy progressions, flickering percussion and swooning syncopated (but never jarring) melodic counterpoint show exactly why big Billy is still so present in our record collections and our hearts.