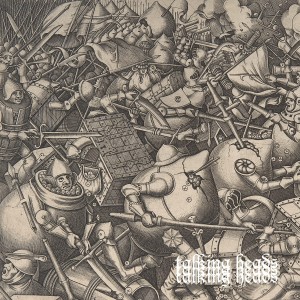 black midi, the enigmatic London-based four-piece that 'are less interested in proving themselves the future of indie rock than in imagining indie rock from the future' (Pitchfork), present new single, “Talking Heads”.

“Talking Heads” is a calculated intensity, driven by frenzied percussion, bright, vivacious guitar, and spastic vocals. 'We've always tried to make it heavy but danceable, melodic but good rhythms,' says vocalist and guitarist, Geordie Greep. 'It is accessible music, there are experimental aspects that we've taken from when we went crazy at the beginning, we've just reigned it in to make something that is pop music.'

Alongside the band’s recently shared single, “Crow’s Perch,” “Talking Heads” will be released as a double A-side 12” via Rough Trade.

A. Talking Heads
B. Crow's Perch