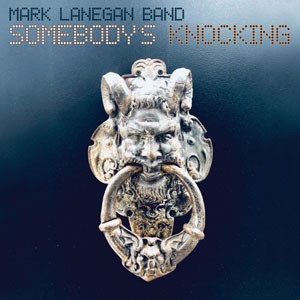 ‘Somebody’s Knocking’ is the eleventh album from Mark Lanegan. The album pulsates with energy echoing the punch of Eighties garage metallers Raw Power and the sweep of brooding atmosphere concreted by late Joy Division. With his love for electronic dance dating back his youth, tracks on ‘Somebody’s Knocking’ act as a callback to these days whilst simultaneously signifying a definitive shift in his sensibilities and very approach to songwriting.

It’s unsurprising then that ‘Somebody’s Knocking’ was cowritten by Rob Marshall - of Exit Calm and collaborator on 2017’s Gargoyle - alongside Martin Jenkins of electronica project Pye Corner Audio. In Lanegan’s own words, he approached working with the two “from the perspective of a fan.” This is unsurprising; Lanegan’s love for European dance music even led to Jenkins contributing album remixes for both 2015’s ‘A Thousand Miles Of Midnight’ and 2017’s ‘Still Life With Roses’, Pye Corner once again proving to be the perfect foil for Lanegan’s more overtly electronica infused approach.

Mostly recorded in LA over an eleven-day session, ‘Somebody’s Knocking’ is a shift in perspective for Lanegan, showcasing his maturing approach to songwriting and remaining instinctive, elusive and unflinchingly honest.

Barry says: Lanegan's newest outing is full to the brim with gritty, southern rock drive and the undeniable musicality we've come to expect from him over the past 30 years, only this time we get the more electronic-leaning production of Martin of Pye Corner Audio and Rob Marshall of cooking vinyl, a match made in music heaven.