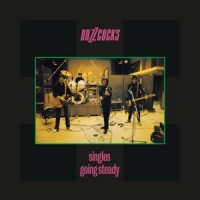 While the Sex Pistols and The Clash might have soaked up much of the punk spotlight in the ’70s, Buzzcocks brought something equally influential to the table. The Buzzcocks’ influence on indie rock, power-pop, punk rock and pop-punk is hard to overemphasize. When you think of the punk-pop tag, no band embodied it or perfected it quite like Buzzcocks.

Their songs were gritty, speedy and short like a lot of other punk music, but few punk bands remained committed to pure pop songwriting like Buzzcocks. Pete Shelley’s voice was snotty and full of attitude, their lyrics pushed social boundaries and the band’s guitars were pumping and lightning fast, but their infectious melodies might have fallen more in line with the pop or New Wave acts of the day than say, The Damned or The Stooges.
While albums like Another Music in a Different Kitchen or Love Bites are still worth digging into, the general consensus is that Buzzcocks’ most essential release is their 1979 singles compilation Singles Going Steady. It contained album cuts like “Ever Fallen in Love (With Someone You Shouldn’t’ve),” non-album singles like “Orgasm Addict” and “Everybody’s Happy Nowadays” as well as B-sides like “Autonomy” and “Noise Annoys.” The album’s eight singles and eight B-sides buff out the occasionally forgettable moments of their LPs and it’s the most accurate document of Buzzcocks as a band.

David says: Quite simply it’s hands down the best ‘best of’ in the history of pop. Originally released in 1979 this edition has been brought back to life by the good folk at Domino Records. “Orgasm Addict”, “What Do I Get?”, “Ever Fallen In Love (With Someone You Shouldn't've?)”, “Harmony In My Head”, “Autonomy”.... The list goes on, what more could you possibly want?!