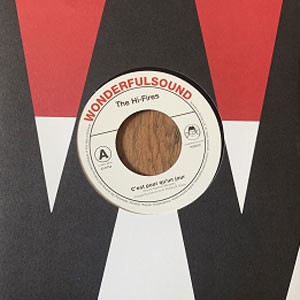 Exploding on to WONDERFULSOUND from somewhere between the mid 90’s and the vinyl record diggers vintage soundtrack scene, The Hi-Fires drop their debut collection of musics, spreading their sonic Gris- Gris far beyond their own island life.

The origins of this project lies deep within the man responsible for pulling The Hi-Fires together, respected vibester & go to drummer Rupert Brown. His drumming career has seen him work amongst such icons as Roy Ayers and his debut production saw him guide and launch the dust bowl soul of Angelina’s Vagabond Saint back in 2017 on WONDERFULSOUND. With The Hi-Fires his take on Hip Hop is obscenely forthright but his productions and arrangements pull each track through the continents of his experiences.

“The record is set in an exotic world of “ French Kung fu “ in the 1970’s : to create the ultimate soundtrack for a low budget movie shot on location in La Havana Cuba” Rupert informs .