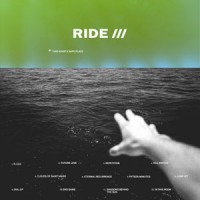 Ride are back with their second album since reforming — it’s titled This is Not a Safe Place and is out via Wichita. They once again teamed with producer Erol Alkan and mixer Alan Moulder, both of whom worked on 2017’s Weather Diaries, which came together quickly at the end of 2018. The first single is the sparkling “Future Love” which feature Ride’s lush, signature harmonies. They’ve always had a Byrds side to them and that plays out nicely here in a “Twisterella” kind of way. “Future Love is a song about the beginning of a relationship, when everything feels possible,” says the band’s Andy Bell.

Barry says: Ride were obviously one of the most influential bands in the shoegaze scene in the early 90's but since their reformation for 2017's ' Weather Diaries' have veered a little more towards the more stargazing end of the indie spectrum. Big rock choruses and catchy riffs work their way beautifully beneath the ever-hypnotic vocals of Gardner & Bell. A huge leap from their already brilliant 2017 offering, and another sign of Ride's essential place in our musical landscape.