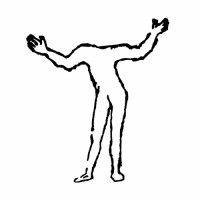 It’s been eight years since Bondy last released a record, and his distaste for the present day has intensified. But rather than avoid popular sounds, on Enderness he gathers and subverts modern tools to construct his indictment of the modern world. With an arsenal of synthesizers, drum machine, sparse electric guitar, and a skeptic’s pen, he builds a plodding dystopian story of living death stoked by internet anti-reality, big pharma conspiracy, and environmental apocalypse—aka 2019.

It’s existential dread as mid-tempo cradlesong, the music of our worst sleepless nights. “Stranger if you come/Know that much is broken/I forget the way/Surrender is spoken,” he sings on album standout “Images of Love,” bass pulses driving the caustic groove. On “Diamond Skull,” Bondy strings tragic and worrying subjects of popular obsession into a stream-of-consciousness phantasmagoria over a simple guitar riff, like Nick Cave on “Higgs Boson Blues.” Observations about white nationalism, spiritual charlatans, and hollow celebrity worship spill into internet speak: “OMG sea to sea/L-M-F-A-O,” he sings with a knowing wink. Like so many who simultaneously bemoan and fuel the simulation—tweets and grams as a form of self-flagellation—Bondy is both in on and imprisoned by the joke.