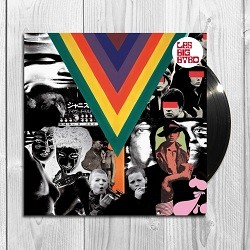 Way back in 2017, we put out Les Big Byrd's now-classic single "Two Man Gang". It's been a huge hit ever since, both in Sweden and abroad, and actually just hit a million plays on Spotify! To celebrate, we've pressed a very special double A-side 7" single, featuring new version of the song, this time with the lyrics rewritten into English, following how well the version went down live, on their last UK tour. The flipside of the 7" is "Mannen Utanför", which is also one the highlight tracks from their recent LP "Iran Iraq IKEA".