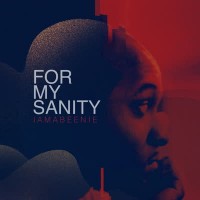 Following up 'The Power of Same', the first single off 14KT's new project, featuring Muhsinah, and remixed by Kaidi Tatham, 'For My Sanity' is a "freedom project", an album rooted in free creation, without being tied down by bars, patterns, scenes, and sequences. The intention behind this long-player is clearly stated all throughout the 12 tracks: releasing the angst of the current climate we are facing through collective artistic means.

"I made all the music really late at night after my day-to-day work, as an escape from "what I normally do". Paired with the everyday struggles of being an artist, it was very stressful hearing about so many deaths––especially due to law enforcement. Making "For My Sanity" was how I was trying to find peace of mind every night so I could go to sleep." says 14KT.

The themes of the album sway gracefully from personal philosophies and creeds, to burning social matters and celebration of the importance of family and genuine, fruitful friendships. If we were to classify this in a genre, we would say For My Sanity is a jazz record, at its core, but elements of hip hop, soul, r'n'b and latin music are easily recognisable and at home on the album.

"I challenged myself to create a jazz album, primarily using Native Instruments Maschine. 85% of the album was created on there. The rest was my amazing friends and myself playing instruments." KT continues.

The journey of this release is a story in itself, as the primary thought wasn't for it to be released, especially with a label. But when this landed in DJ Gilla's inbox, and then shared with the First Word team, it was clear that the music was right up First Word's street.