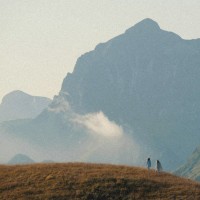 Following Jaguar Mirror [c.2016] and Night School Of Universal Wisdom [c.2017], psychonaut Thunder Tillman and his personal shaman Pontus deliver another sublime EP, completing an illustrious trilogy with arguably their most expansive work to date, Condor Sunﬂower. The title track is emotionally overwhelming, a drum procession that carries a righteous battle hymn to epic heights, accumulating primitive instrumentation, ceremonial chants, emotive chord changes and Beach Boy harmonies before exiting on a tear-jerking coda. The intermediary track Sväva is just as vulnerable, a modestly-arranged and leisurely-paced lullaby, where angels coalesce with a droning organ and eventually unfurl into the warm glow of rapture. Before we hit rock bottom, Thunder and Pony halt the elevator, abandoning any sense of melancholy and climbing to new heights with Creation Discoteque, an 11-minute Prog beast that chronicles a myriad of their musical adventures. This retrospective of altered states does seem designed to drop the curtain on their meticulously-crafted narrative, but not without foreshadowing their future and throwing in an air-shaking rave-up that sprints toward the ﬁnish line. What we ﬁnd enviable, spanning 3 glorious Thunder Tillman EPs and short ﬁlms, is the duo’s creative simpatico, something that many artists in collaboration never truly behold. It’s not their joint musical intuition, their intrinsic understanding of one another’s craft, or even the power of their improvisational tether, but their spiritual alliance that nobody can touch. It’s as if they share a tandem bicycle ride on the highest plane of consciousness to lounge in the members-only spa where they telepathically discuss secrets of high-grade musical alchemy.

Patrick says: ESP's resident shaman Thunder TIllman switches into ayahuasca folk mode here with Condor Sunflower, a pastoral and proggy jam which could be Fleet Foxes, if they'd arrived on a spaceship rather than the Mayflower. "Sväva" is a super chill and transcendental, man as well be called Blaine brah and "Creation Discotheque" will play nicely with Amaringo, DJ Ground, Whodamanny and a drug addled Empire Of The Sun.

A1. Condor Sunflower
A2. Sväva
B1. Creation Discoteque