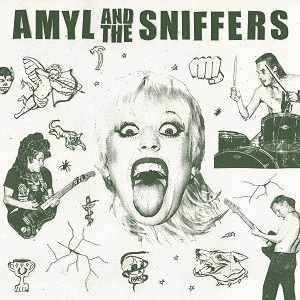 The debut album from Amyl and the Sniffers is the sound of 21st century Australia recorded in Sheffield with producer Ross Orton. It's primal and explosive with a love of glam, the 70's Sharpie movement and good time rock n roll backed with lyrics that somehow are simultaneously bleak and nihilistic, yet humorous and celebratory. The album is full of beefy riffs and stomping drums that rages and rolls and lives up to all the hype. It has attitude, sass and Amy's sore throat howl.

Coming off the back of a hair raising gig at London's Moth Club (the band 'almost literally tore the roof off'), Amyl And The Sniffers are certainly one to watch if you like feisty, independent punk-n-roll.

Mine says: Gnarly, energetic garage Aussie punk that demands to be played loud. Like a cross between GØGGS and Be Your Own Pet, this is their debut long player on Rough Trade! Thrashing guitars and an irreverent band name - what more could you ask for?

Amyl And The SniffersComfort To Me

Amyl And The SniffersBig Attraction & Giddy Up