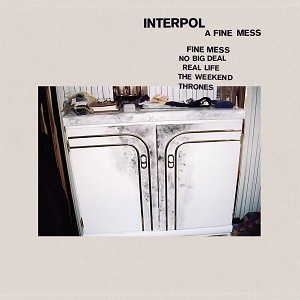 Recorded during time spent in upstate New York with Dave Fridmann, the five songs that make up A Fine Mess gradually emerged as a body of work with a narrative and flow unto itself. The resulting set is a living, breathing postcard from the band to their fans as they tour the world throughout 2019, and a linear continuation of the visceral and contagious energy set loose with Marauder.

Echoing its title, the artwork for A Fine Mess is illustrated by a series of lost images, recovered from an abandoned police station in Detroit, MI. In a crumbling evidence room - amongst the rubble - an undeveloped roll of film, dated “1-20-96”, featured latent images of a breaking and entering scene, the rooms in chaos.

From the beguiling refrain of the title track, to the soulful topsy-turvy of ‘No Big Deal’, cathartic chorus of long sought-after live favourite ‘Real Life’, anthemic swell of ‘The Weekend’, and angular shades of ‘Thrones’, A Fine Mess is a bracing and distinct entry in Interpol’s oeuvre.