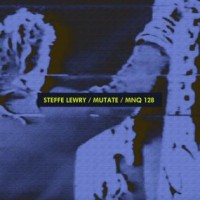 Mutant industrial acid house from one member of the UK Mutoid Waste Company art and performers collective. The Mutate tracks where created in 1990 when Steffe Lewry, vocalist composer and producer from the UK, active since the mid 1970 (Gong, Planet Gong, Here & Now), was living with members of the Mutoid Waste Company - the legendary performance arts group founded in West London in the early 80s.

Influenced by the movie Mad Max and the popular Judge Dredd comics, they specialised in organising illegal parties in London throughout the 1980s, driven at first by eclectic assortments of fringe music such as psychedelic rock and dub reggae, but then embracing the burgeoning acid house music movement by the late 1980s. They were famously described as "part street theatre, part art show and part traveling circus" in the 1986 LWT documentary South of Watford presented by Hugh Laurie.
The group became famous for building giant welded sculptures from waste materials and for customising broken down cars, as well as making large scale murals in the disused buildings where they held their parties.
In 1989, after a number of police raids on their warehouse in King's Cross, they left the country and travelled to Germany where they became notorious for building giant sculptures out of old machinery and car parts, one of which was 'Käferman', a giant human figure with a Volkswagen Beetle for its chest, offering a Bird Of Peace sculpture that overlooked the Berlin Wall towards East Berlin and the regime of East Germany. They had a collection of scrap military vehicles, including a Russian MiG 21 fighter aircraft which 'followed' them around wherever they went, and a painted tank known as "the Pink Panzer".
The 3 tracks where included in a video compilation of Mutoid art, “How The Mutoids Brought Down The Berlin Wall”, edited by film maker Jonathan Barnett. To make these tracks Steffe used a 4 track teac reel to reel, a Korg DDD1 drum machine and Fender stratocaster guitar.