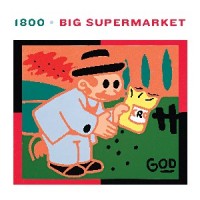 Rest-of-the-World pressing of Big Supermarket's debut LP, previously released in mid 2018 in Australia only via the Hobbies Galore label. Little information about Big Supermarket exists online - no 'official' band photos, no accurate information re personnel, no social media profile - so much of what is known about the band must be earned in the old fashioned way: from listening to the music itself. That alone has been difficult enough, given that until now the record had no distribution outside of Australia and was only available by Bandcamp. In an era of information overload and endless image cultivation, it's refreshing to uncover a band - yes, a band, not producer or 'solo bedroom auteur' - who favour the shadows, who prefer to leave some things unsaid. What is present is a collection of fourteen songs recorded over a three year period in Kensington, Victoria, that trace a wobbly line through the backstreets of jangle-pop, new wave, and post-punk in a way that sees them oscilate between the melodic and the obtuse.

In that sense, there's an obvious affinity with much of the early Flying Nun output, where an appreciation of the classicism of pop songwriting rubbed shoulders with a fierce DIY spirit charged on the more outre possibilities of punk autodidactism. Australia is making a habit of producing compelling, singular new guitar-led bands. In their shunning of the traditional cycles of publicity and promotion, Big Supermarket have counter-intuitvely emerged as a leading light. A secret to be passed around that doubtless wont remain a secret for much longer.