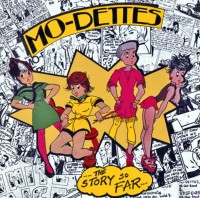 SEMINAL 1980 POST PUNK UK TREASURE. LIMITED 180GRM VINYL FROM THE ORIGINAL MASTERS + LYRIC SHEETS ON INNER SLEEVE + DIE-CUT A4 STICKER. INCLUDES PAINT IT BLACK, WHITE MOUSE DISCO & KRAY TWINS - Originally released in 1980 on Deram Records (a division of Decca), this is the first time this seminal UK post-punk album has been reissued on vinyl. The Mo-dettes were an all-female band, formed in 1979 by guitarist Kate Korris (The Slits), Jane Crockford (Bank of Dresden), Ramona Carlier (Kleenex) and June Miles-Kingston. They were in the heart of the late 70s London art, film & punk scene with some of the members assisting Malcolm McLaren on the set of the film, The Great Rock ‘n’ Roll Swindle, as well as living in a community squat with Joe Strummer and Sid Vicious. Their branding was eye catching too, perhaps helping to pull in a wider audience, or it could have been influenced by some of the band members’ art backgrounds too. The album features a version of The Rolling Stones’ Paint It Black, a remake of their debut single White Mice (renamed White Mice Disco), plus a cover of Edith Piaf’s Milord, along with other original penned songs.The band toured for four years and they supported two-tone ska bands such as Madness and The Specials before breaking up finally in 1982. When the members went their separate ways, many continued to work and be associated with artists such as Fun Boy Three, Everything But The Girl, and The Communards, a.o.