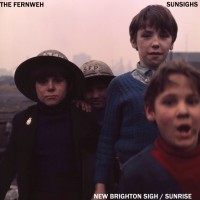 2 Track single including Sunrise a cover of a song by The Who and a new version of New Brighton Sigh.

Championed and playlisted by BBC 6 Music. Recorded in seclusion on the North Yorkshire coast and transporting listeners on musical journey. Three friends, Jamie Backhouse (guitars), Ned Crowther (vocals and guitar) and Oz Murphy (keys/saxophone) gathered to make the album they always knew they could make, based on a pure and profound love for a golden era for British and US folk rock. Wringing every last drop of their combined experience into a cup that overflows with melody, song craft and deeply evocative imagery of a quintessentially British era of ‘mainstream psychedelia’, they are joined by Maja Agnevik (vocals/flute) and Phil Murphy (drummer). Melodies and stories inspired by distinctly British, coal-fired version of 60s/70s psychedelia. Layered vocal harmonies, gentle, steam-train percussion and strokes of piano, acoustic guitars and subtle string arrangements are a feature of this sublime and compelling debut. A return journey into Britain’s explosively creative, post-war period.