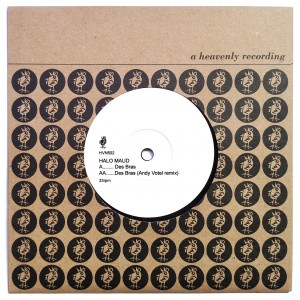 Andy Votel says: "Working with Halo Maud's song came extremely naturally to me, and I thank Jeff [Barrett, of Heavenly] for recognising this connection. The contrast of her strong melodic songwriting combined with the fragility of her vocals is a real secret weapon and much more than just a breathy pastiche. I think Maud effortlessly captures many unique subtleties in French language music which so many contemporary bands seem to forget, and it's ingredients like these which gave me the confidence to take a more minimal route with this mix, which I appreciate.

"In the past I could only dream of finding a singer that comes close to Léonie Lousseau or Ann Sorel so working with Maud's vocals was an enjoyable experience and I already regard this short track as one of my personal favourite production achievements.... which I can't wait to play on the radio... off 7" vinyl naturally."

Maud says of the track, "I wrote the basis of the song in a few minutes, the day before a show. It was just the guitar and the voice, very simple. The rest of the track is a mix between a band jam, improvisations, ambient sounds, happy studio accidents, and all this material has been re-cut and tinkered with, until I felt it made sense. "It’s an amazing feeling to discover another vision of your own song, and Andy Votel’s version really overwhelmed me, in a good way. This is another song, but it’s still me. Thank you for this huge present.”

The original song features on Halo Maud's debut album, Je Suis Une île (which translates as "I Am An Island"), released on Heavenly Recordings last May.