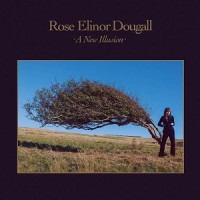 Two years on from the critically acclaimed Stellular, Rose Elinor Dougall returns with her third solo album A New Illusion. With a noticeable shift in dynamic A New Illusion sees Dougall looks into the abyss – the millennial-burnout, Brexit-apocalypse, those impossible disappointments of growing up in the 21st century Britain – singing quietly with piano, with guitar, and with a gentle fuck-it attitude. “I just wanted to sit at the piano and play, I wanted to return to something essential,” Dougall explains. “There’s something comforting and solid about that instinctive relationship with music, with playing and singing.”

With that essential instinct, Dougall is aligning herself with the tradition of Sandy Denny, Bridget St John, Anne Briggs – English women who sang with proud fragility. “There’s something essential and earthy about them,” says Dougall. “there’s something more bloody about the way they sing.” It’s evocative of the English sweet-sharpness of Kirsty MacColl too – in the dreamy jangling pop lifted up by clear folk vocals and a minor-key melody.

Lead single First Sign took shape during a trip to a remote part of Andalusia. “I was trying to cut loose from a situation, and this song is about vainly attempting to shake oneself free.” Sonically Dougall wanted to reflect the “sparseness and silence of the place in the sound of the track. I was looking for a loose, hazy feeling to the music to sit with the imagery of the song. I wanted it to sound like the end of summer.”

There’s a darker rage on ‘Take What You Can Get’, with it’s plunging guitar riffs and panicky violin jags. The album skips and blurs between the public and the private realms. “There’s a lot of reflecting on quite a turbulent twenties that’s not necessarily resolving itself in my thirties.”

‘That’s Where the Trouble Started’ started as a conversation with a girlfriend, about how and why we allow dysfunctionality to continue. It’s about accepting responsibility, and trying to wear your fragility in a proud way.”

Dougall takes the helm for the first time, directing the whole team and co-producing with old friend Matt Twaites. “This doesn’t have the same safety net as other things I’ve been involved in – it’s all on me. I’ve set myself new challenges, to see what happens.”

The record features her brother Tom, also the lead singer in Toy, his bandmates Maxim Barron and Max Claps, Euan Hinshelwood and Joe Chilton of Younghusband, and other old friends from London, Brighton and Cornwall. “It does feel like a really nice group effort – I didn’t want to be over-prescriptive, so some of it is quite loose. I wanted to make it about musicianship.”

A New Illusion is slower and more confident than her previous albums – the themes may be urgent but the sound is more relaxed. “I don’t feel the same angst about acknowledgement or approval. I decided to trust my instincts, to see if they connect with the world. I’ve been making music all my life, and this feels like a culmination of those experiences. I feel I’ve grown more fluent, more confident, more in charge that I have come closer to my natural sonic habitat.”

L.A. PeachCome On Over And Test Me