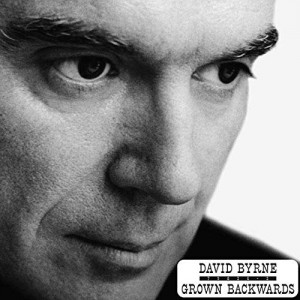 David Byrne's Nonesuch Records debut album, Grown Backwards, first released in 2004, makes its vinyl debut almost fifteen years later. The vinyl edition comprises the original album plus six previously unreleased tracks, including a duet with Caetano Veloso on their song ‘Dreamworld’. The double LP was mastered for vinyl by Greg Calbi at Sterling Sound and pressed on 140g vinyl at Record Industry in the Netherlands and comes in a metallic sleeve.

‘It fits alongside the best of his career and adds another solid release to a solo catalog which will hopefully become more cherished in time,’ said Pitchfork in its review in 2004.

‘In 20 years, as we straighten our faces with botulism, braces, and stem cells, the album will stand up’. Mojo gave Grown Backwards four stars, finding that ‘some of Byrne's most deliciously quirky lyrics ensure an event-packed listen.’ The Guardian called the album ‘one of Byrne's most rewarding experiments yet. These are wonderful exercises in songcraft.’ The Daily Telegraph said: ‘This must surely be Byrne's most satisfying album. An unexpected delight.’ Uncut named it among the Albums of the Year, and the Sunday Times declared: ‘Really rather wonderful.’