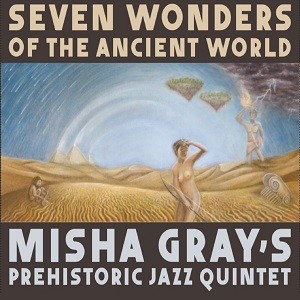 A flute made out of a vulture’s wing bone was recently discovered in a cave in Southern Germany. Carbon dating shows that the instrument is 35,000 years ago. The position of the holes on the flute corresponds to the pentatonic scale. This means that the pentatonic scale has been with humans for longer than writing, agriculture and civilization. The mysterious, beautiful and powerful sound of pentatonic scales is found in almost all musical styles, from Oriental, African, folk, blues and Indian classical music.

This provided the inspiration for Misha Gray’s “Prehistoric Jazz Quintet”, which performs a variety of extended compositions, tonal poems and structured improvisations in an attempt to explore how the core of music has resonated deep within humans since the dawn of Man.

“Seven Wonders of the Ancient World” is the band’s third album, featuring one composition representing each wonder. Each track brings a different colour to the palette from the fiery “Pyramid of Khufu” to the serene “Hanging Gardens of Babylon”, as well as the haunting “Mausoleum at Halicarnassus”. The album features Misha Gray as composer and pianist, Nick Walters on trumpet, Kyran Matthews on tenor sax, Hugo Harrison on bass and Johnny Hunter on drums.

1. Pyramid Of Khufu
2. Hanging Gardens Of Babylon
3. Colossus Of Rhodes
4. Zeus At Olympia
5. Pharos Of Alexandria
6. Temple Of Artemis
7. Mausoleum At Halicarnassus