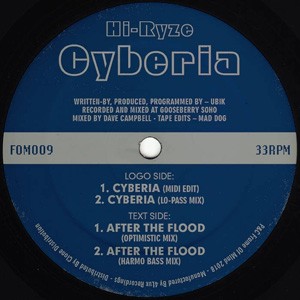 From the same producers that brought you the "Timenet" release, here we have a mighty fine re-issue of the very first Hi-Ryze record. "Cyberia" was originally released through cult label Brainiak back in 1990. Since then the Ubik production team released half a dozen of EP's under the Hi-Ryze name through various other classic imprints such as General Productions and Certificate 18. Here we have two of our faves handily compiled onto one jazzy AF disc: "Cyberia" - a twangy, highly kinetic, and massively shuffled affair that lands right slap bang between Chicago and Detroit; and "After The Flood" - a rave-indebted big room roller with hoover leads and more drum machines shuffled to oblivion! - don't miss the vintage woodblock attack on this one! Remastered from the original DAT tapes and sounding frrresh - do not sleep!

Sil says: Mega and raw old school techno with killer basslines to make sure your neighbours keep appreciating you. Rave til you die and do play this loud for max effect.