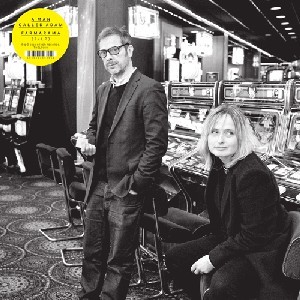 Returning after a long-lasting hiatus is no mean feat - how to stay relevant, to plug the gap and come back as strong as where things were left off. A Man Called Adam’s return however, is as emphatic as it is endearing. Sally Rodgers and Steve Jones are back with a brand new album of melodic, emotional, pop-not-pop tracks, bringing fresh layers of feeling, from warmth and passion, to sentimentality and sorrow.

Displaying a wealth of knowledge gained through two lifetimes spent immersed in music, "Farmarama" showcases a myriad of styles and richness in arrangements. Moving from soulful slow jams to lo-fi disco, Balearic house to dub, post-rock electronica and art-house ambience, there are glistening horizons and windswept beaches conjured up at every turn.

Take the likes of ‘Mountains & Waterfalls’, ‘Farmarama’ and ‘Michael’ and hear dancefloor, disco tinges that marry live percussion, sultry Rhodes and hearty basslines, oozing emotion. But venture deeper to uncover a pensive, yet equally expressive side to the record through tracks like ‘Higher Powers’ and ‘Top Of The Lake’. Take the later as an example, a neo-classical slice of magical ambience, that wouldn’t be out of place soundtracking sweeping views of shimmering scenery. Or ‘Spots Of Time’, beginning as a frenetic, glitched out piece of electronica, before opening into a brooding breakbeat journey.

Full of vintage warmth, analogue synths and intricate textures, Rodgers, Jones and new collaborator, Paul Smith, combine experimental touches with an undeniable catchiness, balancing electronic elements, with acoustic sparkles. In harmony with this, the contemplative, poetic verses, that considers life as a hi-definition, Westworld-like simulation, a Farmarama, and disco as a way of being, meld and morph a conceptual narrative that tugs on the heartstrings of life.

"Farmarama", then, isn’t your archetypal album. It’s an emotionally charged, intelligent and enlightening body of work that’s Balearic to the bone.

Patrick says: In an era of overwhelming cynicism, the honesty and emotion of "Farmarama" is entirely refreshing, much like the breezy blend of Balearic soothers, coastal coolers, disco drivers and downbeat gems which make up this pop-not-pop triumph from A Man Called Adam. Welcome home...