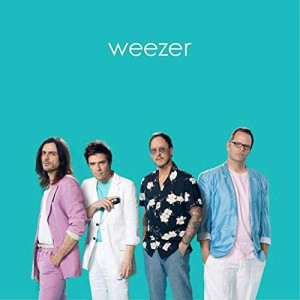 Throughout a sold out arena tour in summer 2018, Weezer began working covers into their set, ranging from “Take On Me” by a-ha to “Happy Together” by The Turtles, in addition to their massive cover of “Africa” by Toto, which became a viral and radio sensation upon its release earlier that year. Given the tremendous response to these songs at the shows, the band was inspired to put together a covers album -- and thus WEEZER (THE TEAL ALBUM) WAS BORN!

Weezer (The Teal Album) precedes the band’s forthcoming new album of original Weezer songs, Weezer (The Black Album), which will be released on March 1, 2019. Weezer (The Black Album) was produced by TV On The Radio’s Dave Sitek, with whom the band worked for the first time. The album’s songs were entirely written on piano by frontman Rivers Cuomo for the first time in Weezer history, creating some of the most satisfyingly awesome songs in the entire hits-filled Weezer catalogue. With band members switching up instruments in the studio, and choruses filtered through Sitek’s own encyclopedic musical references of everything from Gorillaz to Can to Pink Floyd, Weezer (The Black Album) is the bold next step in the winning streak of acclaimed albums they’ve released since 2014. The album’s current song, “Can’t Knock The Hustle,” recently became the band’s sixteenth Top Ten single at Alternative Radio.

Barry says: It's got a cover of Africa on it, which is my jam. Therefore, it's superb.