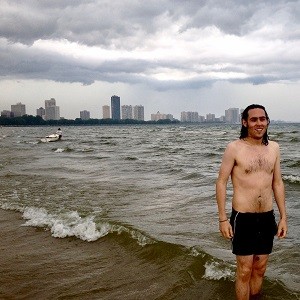 Funny thing about kicking: it’s one of the first and last things we do. In the womb, a fetus kicks to announce an immanent arrival. Meanwhile, laid out on a stretcher, the dying man is “still kicking” up until his final moment, when the last thing he kicks is the bucket. All through life we take our kicks: teenage kicks, modern kicks, kicks in the gut. These days, with the worldwide rise of fascists, demagogues, abusers, and hypocrites, the kick we feel most often comes while we’re down.

From their sudden and deliberate first chord on Love Keeps Kicking, beloved British punk collective Martha announce their intent to kick back. Across 11 tracks, these daughters and sons of Pity Me, England, show that, while our world might be in spiral, there is still plenty worth fighting for. In many ways Love Keeps Kicking is a breakup record, with each song inhabiting different parts of the process. “This year blew my world apart” sings guitarist/vocalist Daniel Ellis on album opener “Heart is Healing.” With lush vocal harmonies (and one of the best riffs in Martha’s discography) “Healing” explores the uncomfortable period between love’s end, and when the heart is ready to move on.

Elsewhere, the opening chords of “Orange Juice” (arguably the best song Martha have written to date) echo the kicking of it’s narrator’s heart, as they suddenly realize with fearful clarity that their longtime relationship is ending. “I didn’t know it then, but you were falling out of love with me / It’s a new development in the plan / a painful change in circumstance,” Nathan Stephens-Griffin sings, wringing out the imminent meaning in each word. Ending just as it begins, “Orange Juice” is Martha at their most heartbreaking, hitting a tender, bittersweet, middle ground between Paul Westerberg and the Pastels as Stephens-Griffin confesses “I don’t know what to do now.”

But while many songs are openly about romantic breakups, most could just as easily about the pain of seeing the world swing dramatically towards the far right. As Pitchfork noted in their glowing review of 2016’s Blisters in the Pit of My Heart, Martha explore the “intersections of reality and emotionality.” For a band whose identities are political whether or not they want them to be, daily life in 2018 is often a kick in the teeth. On Love Keeps Kicking, this vulnerability becomes one of Martha’s greatest strengths. Again and again, the band lovingly gives voice (all four voices) to lives lived on the edge: institutionalized children (“Mini Was a Preteen Arsonist”), outcasts (“Wrestlemania VIII”), lovesick demonologists (“Love Keeps Kicking”), and feminist sci-fi writers (“Lucy Shone a Light On You: The Ballad of Lucy Connor Part II”). These are the people Martha celebrate, reminding them (and us) that love might not be there now, but it’s still kicking.

Maturity in punk is often code for “boring”. Sometimes that’s true, but if Love Keeps Kicking illustrates anything, it’s the importance of growth in a stunted world—of knowing how to love what you have, and how to celebrate the loves you’ve lost. Martha have already made a case for themselves as this generation’s Buzzcocks (if not this generation’s Clash), and with Love Keeps Kicking fans will likely find themselves discovering even more about the band to love. Because even if the world’s going to shit, love keeps kicking.

Barry says: Channelling the spirit of late 90's skate/pop-punk Matt and I have been rinsing a bit of late, Martha have a singular talent of bringing the chord sequences and progressions of American frontrunners firmly into British territory with a wry, anglican wit and a warmingly Northeastern accent. Snappy drums and soaring, fuzzy thrashed guitars condensed into three-minute bursts of energy and optimistic glee.

SIDE A
1. Heart Is Healing
2. Sight For Sore Eyes
3. Into This
4. Wrestlemania VIII
5. Mini Was A Preteen Arsonist
6. Love Keeps Kicking

SIDE B
1. Brutalism By The River (Arrhythmia)
2. Orange Juice
3. The Void
4. Lucy Shone A Light On You
5. The Only Letter That You Kept

MarthaPlease Don’t Take Me Back

MarthaPlease Don't Take Me Back