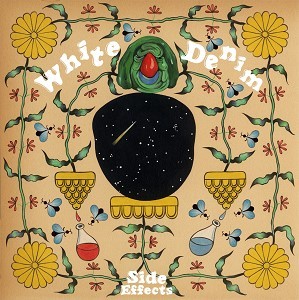 Less than a year after their last album Performance, the ever-prolific White Denim are back with their eighth record Side Effects. More in line with the experimental, freewheeling spirit of their fan-favorite record Last Day of Summer than anything else they’ve done since, Side Effects is a record that captures the essence of the band’s full-throttle live shows. Featuring a rotating cast of band members led by James Petralli and Steve Terebecki, these tracks draw on the sounds of different personnel to create a cohesive whole – the result being an album that’s as varied and vivacious as anything they’ve ever done.

If you’re coming back to White Denim after a few years away, Side Effects most likely picks up exactly where you left off: a record showcasing a hugely energetic band bursting at the seams. And if you never checked out, then Side Effects is instead a wholly rewarding record – one that celebrates every form of White Denim to date and sets the stage for a brand-new chapter.

Barry says: Absolute belter again from White Denim, this time treading a slightly less psychedelic path than on shop favourite 'Performance'. There are hints of eastern timbres and residual lysergic progressions, but the main body is a less meandering and more direct slipstream of jagged rock and shimmering fuzz.

A1. Small Talk (feeling Control)
A2. Hallelujah Strike Gold
A3. Shanalala
A4. NY Money Side
B1. Out Of Doors
B2. Reversed Mirror
B3. So Emotional
B4. Head Spinning
B5. Introduce Me