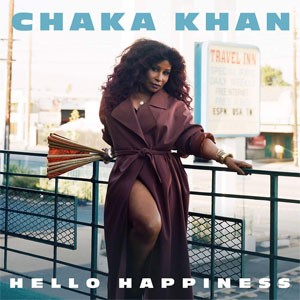 Chaka...Chaka...Chaka...Chaka Khan! That's right folks, the queen of funk returns, only this time it's her who's doing the rocking! Her first solo LP in twelve years, "Hello Happiness" sets Chaka's timeless voice (Still impeccable) to an empowering collection of songs featuring cutting edge production from co-writer Switch (proving there's more to life than fidget!).
The Piccadilly camp flipped its collective lid when the obscenely limited 12" of Fatback-sampling lead single "Like Sugar" landed last summer (Massive props to Jason Boardman for dropping it at the Nado 20th Birthday!), and now a full length LP is here, I'm struggling to contain myself. If the cynical out there wrote "Like Sugar" off as a fluke, they're about to get slapped silly by the finest funk record in years.
Opening salvo "Hello Happiness" and "Like A Lady" (check out those Belle Epoque strings) update Chaka's classic sound with some pristine modern production, while "Don't Cha Know" erupts into some hard rocking, trap rattling, gospel organ mutant made for scaring the neighbours. Skipping to the flip, the rough and tough funk continues via "Too Hot", this time with a NOLA blues flavour which is frankly irresistible. Next up it's "Like Sugar", the Fatback chopping, B-boy big beat hit of the last decade, not just a high point on this LP, but on recent pop music in general. "Isn't That Enough" finds Switch exploring his Black Ark fascination, cooking up a humid dub disco groove for Chaka to turn inside out with her powerhouse vocals. Last but not least, we're in end of night soul territorie via the "Long Train Running", "M.P.B."  vibe of "Ladylike", a sultry, snaking shuffler for dancing upclose.
Long live the Queen!

Patrick says: After over a decade out of the limelight, a Chaka Khan comeback seemed unlikely, and the quality of "Like Sugar" took everyone by surprise (best pop single of the teens?). Well, that was no flash in the pan, and this whole LP bangs, covering a variety of styles, showcasing Chaka's sensational voice, and marrying the vintage and cutting edge perfectly.