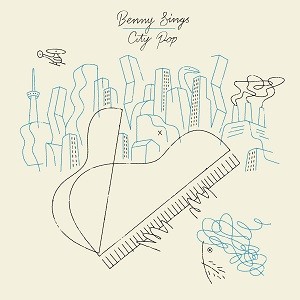 Dutch pop maverick Benny Sings has been working his quirky AOR magic for fifteen years now, fusing R&B, pop, soul and jazz into bangers and ballads without gaining the widespread recognition he deserves. I get the feeling all that is about to change. In the past couple of years, Benny Sings co-wrote and featured on Rex Orange County’s hit ‘Loving Is Easy’ and has collaborated with Anderson Paak, GoldLink and Mndsgn, among others.
Now he's back with his sixth LP, and first for Stones Throw, "City Pop", a glorious selection of high gloss pop songs featuring the likes of Mayer Hawthorne and Cornelius. Despite a heavy Japanese influence on the LP, whether it be collaborators Cornelius and Sukimaswitch (the “Japanese Steely Dan”) or sleeve artist Ryu Okubo, the LP's title isn't a straight reference to the Japanese pop of the 80s, but rather a reflection of the international cities which shaped its creation. Written and recorded in New York, LA, Tokyo, Paris and Benny’s hometown of Amsterdam, this is global soul for the next generation.