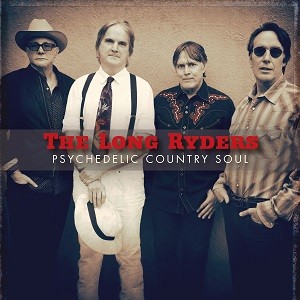 The Long Ryders were formed in 1982 by young American musicians influenced by Gram Parsons, C&W, The Byrds, and the punk scene found in their hometown of Los Angeles. The Long Ryders were an anecdote to formula stadium rock and wimpy synth-pop." The founders of alt-country, The Long Ryders, now release their first new album in over thirty years. Featuring the classic line-up of Sid Griffin, Stephen McCarthy, Tom Stevens and Greg Sowders, it makes the day after Valentine’s Day as much a romantic celebration. The stunning new album follows hot on the heels of the deluxe reissue treatment given to two classic Long Ryders long players, “State of Our Union” and “Two-Fisted Tales”.

The band featured Sid Griffin on guitar, autoharp, and harmonica, Stephen McCarthy on guitar, steel guitar, mandolin, and banjo, Tom Stevens, bass, and Greg Sowders, playing drums and percussion. With a sound reminiscent of the Buffalo Springfield and The Flying Burrito Brothers, but with a harder edge, they anticipated the alternative country music of the 1990s by a decade. Featuring eleven new Long Ryders compositions and a tribute cover of the late great Tom Petty’s song ‘Walls’, this is a Long Ryders for the 21st century; kicking off with the anthemic ‘Greenville’, a track which proves the band haven’t lost any of that magic guitar interplay. ‘Molly Somebody’ is an eclectic pop tune that doesn’t neglect any of their country and rock sensibilities, while the likes of ‘What the Eagle Sees’ reflects the energy of early punk and power pop that so informed them in the early days. You can still hear their personal connection with the music of the 1960s’, but as ever The Long Ryders aren’t a band who live in the past. Album closer ‘Psychedelic Country Soul’ is the greatest testament to that, performed like the previous 11 songs, with precision and fire; the guitars weave and harmonicas build and ebb, the song spreading like wildfire.

The Long Ryders have always been celebrated for what they have to say as much as the music they make. With “Psychedelic Country Soul” their message delivered with 12 strings and never-ending harmonies has never been clearer. This is a Long Ryders album which stands up with their classic albums such as “Native Sons” and their unforgettable single ‘Looking For Lewis And Clark’. “Psychedelic Country Soul” will certainly sit on many Best Of lists at the end of the year. But you can note its worthiness when you hear it. It is that good.