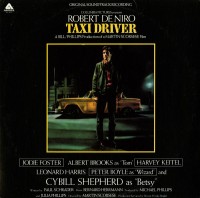 You talkin’ to ME?’; undeniably one of the most famous quotes from movie history and from one of its most memorable characters. Travis Bickle, the frustrated Vietnam veteran in Taxi Driver; the lonely nut obsessed with sex and violence who takes a job as a cabbie to battle his insomnia. Robert De Niro’s legendary performance ensured that this Scorcese classic ended up on many a ‘best movie of all time’ lists.

Bernard Hermann’s score is comprised primarily of a brass section mixing with a saxophone theme. The music swings back and forth, to amplify Travis’ deteriorating mental state. Layered atop the two key components are harps, woodwinds, and even noises of the city, like a nearby drum kit or the music of a theater. It was also Bernard Hermann’s last ever soundtrack. He died just a few hours after completing the score. Like no other he composed a dark and threatening atmosphere that drags you into Bickle’s twisted mind.