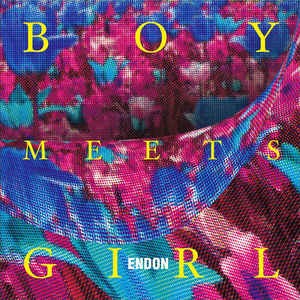 Endon is a band as mercurial as they are ferocious. Comprised of the quintet of vocalist Taichi Nagura, guitarist Koki Miyabe, drummer Shin Yokota and electronics/noisemakers Taro Aiko and Etsuo Nagura, Endon’s music is contained chaos, bending and colliding genres into one another atop a bed of thunderous distortion, feedback, and unearthly squeals. Vocalist Taichi’s voice embodies an unreal number of personalities with wordless howls seething one moment and agonized cries the next, before desperate gasps for air. It comes as no surprise that they have been credited as the most extreme band in Tokyo.

‘Boy Meets Girl’ was envisioned as a soundtrack to an imagined horror film about love. The core of the ensemble’s song structures are often built around Koki’s fuzz-laden guitar and Shin’s drum bombast which propel torrents of hisses and squelches from Taro and Etsuo. Taichi’s largely lyricless screams, moans and whimpers are potent messengers of the songs’ emotional heft. There lies an ecstatic, excited energy amidst the anarchic defiance Endon's music exudes. Born of the same Japanese scenes that gave rise to the likes of Merzbow and Boredoms, their sound is equally diverse and abrasive. ‘Boy Meets Girl’ demonstrates Endon’s singular faculty to produce music that is at once tortured and transcendent.