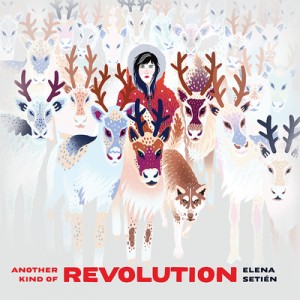 Elena Setién is an artist defined by her vivid songwriting and nuanced compositions. Her music exudes the bold individualism and sense of empathy associated with her homeland of Spain’s Basque region. Setién is a skilled multi-instrumentalist and performed nearly every part on the record save for a few select guitar parts by Steve Gunn. While Elena’s recordings are decidedly pop, she has considerable experience as an improviser. ‘Another Kind Of Revolution’, Elena Setién’s Thrill Jockey debut, is a work of entrancing, effortless beauty.

Setién grew up during a period of political upheaval in Spain, in the Basque region. The turmoil of the post-dictatorship period of the 1980s and the intensive civic actions left her with a sense of duty to fight for progress. Her lyrics throughout ‘Another Kind Of Revolution’ describe the beauty of everyday life and nature and promote the forces of change, not as a burden but as the very source of hope to draw from.

‘Another Kind Of Revolution’ tells its stories through an expansive sonic palette. Pianos and Wurlitzer take on various timbres for each song, trickling in and out of the foreground with Setién’s distinguished voice gently gliding overtop. Careful attention to specific recording techniques and allowing for the slight imperfections in the instruments and amplifiers, bring a depth to the recordings that is both direct and organic. Elena Setién’s work is elemental and bold. Her music bends simple, familiar sounds and compositional forms into thoroughly unique songs. With ‘Another Kind Of Revolution’, Elena Setién continues to defy convention with songs as gorgeous as they are auspicious.