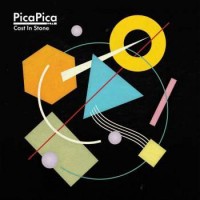 Josienne and Samantha met on the London acoustic music scene several years ago and immediately shared a love of singing and writing. They have been unofficially collaborating for years, often singing backing vocals for each other’s projects or just singing harmonies together for the pure enjoyment of it.

The other half of PicaPica, Adam Beattie - Scotland’s king of soft-spoken chanson - brings gently morphing textures and detailed guitar playing to every bar, while Sonny Johns is a Grammy, Mercury and MOBO- nominated producer / engineer. Sonny’s bass playing and production give PicaPica's otherworldly compositions a seriously grounded sound.

The band first appeared on the scene with their debut EP ‘Spring & Shade’ back in 2016 and are now returning with this new 12” featuring delicate yet empowering new track ‘Cast in Stone’. The release also features two remixes from Seb Rochford - best known for drumming with the legendary Patti Smith - who has also performed on PicaPica’s upcoming debut album.