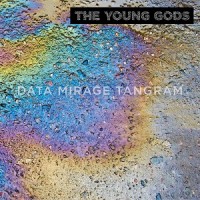 "Sleep my angel, my child, see how the city spreads.” Under Franz Treichler’s wings, huge, breathtaking panoramas unfurl like beautiful dreamscapes on the edge of sleep. A weightless dream that is both comforting and blackened with darkness. A return to known land, whose topography has been modified by time and age. Three human beings in the matrix of Data Mirage Tangram, the new Young Gods album.

Eight years without a studio album. The gods may have eternity on their side, it was about time they followed up on Everybody Knows and addressed the period of artistic confusion – in Treichler’s own words – that followed Al Comet’s departure and his replacement with the original god, Cesare Pizzi. The subsequent tour which focused on the Swiss band’s first two albums, could have ended in a deadlock. Instead, it brought a breath of fresh air to the trio, revitalised by this return to their roots. Rock and electro avant-gardists are not known for their backward-looking attitude. Still, thirty years of uninterrupted activity, celebrated with the publication of an 800page book in 2017, could only strengthen the gods’ will to write a new chapter to their already impressive history.

Data Mirage Tangram was born in a basement amidst people. Franz Treichler (lyrics, guitar, electronics), Cesare Pizzi (sampling, electronics) and Bernard Trontin (drums, percussion) accepted Cully Jazz’s invitation to set up on the stage of the THBBC wine cellar for an open laboratory for the duration of the festival. “That’s when the songs appeared”, says Treichler. “We didn’t know where we were going. Bernard brought an old sampler on top of his drums, Cesare, a laptop, me, a guitar, a bass, a laptop… anything I had on hand. The audience came and went. We didn’t feel obliged to present a finished product. It was really stimulating.”

At the end of the residence, the seven tracks of the album existed in body and mind. The curves still needed to be shaped, the textures refined, and the lengths cut up. The band incorporated the songs into their live repertoire, fine-tuning them for three years into their final structure, captured in Franz Treichler’s studios and mixed on the console of English record producer Alan Moulder (Nine Inch Nails, Editors, Foals). “For the first time ever, this record is the result of entirely collective work”, says the delighted Geneva pioneer.

The result is to be savoured as a major album by The Young Gods and an addition to their multiple experiences as well as their shared DNA. Each track exists for itself while creating a coherent ensemble, a united journey in seven unique steps. “The tangram in the title refers to Japanese puzzles consisting of seven pieces that can form a square or various silhouettes of animals and characters”, says the singer. In this digital world, which the gods explore like visionaries, the music breathes and breaks free, undulating on the string of a guitar that once again takes centre stage.

Entre en matière whispers a haunting mantra and Tear Up The Red Sky orchestrates a cosmic bombardment of divine fury. Figure sans nom returns to the band’s acid groove and Doors influence, while Moon Above ploughs a fallow field, bruising it with unidentified sound objects. The 11 spellbinding minutes of All My Skin Standing let you come back to your senses before a final explosion of white noise and saturated guitars. You Gave Me A Name offers a breath of fresh air, like a welcoming bubble. Finally, Everythem closes everyone’s eyelids, softly and silently.

How would you sum up the Young Gods’ history? “A long road”, says Franz Treichler. A road that unfurls and stretches out to the horizon and its mirages.