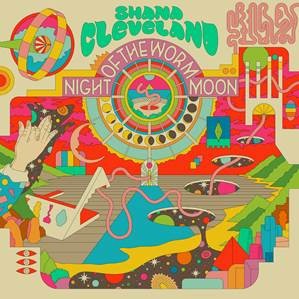 Shana Cleveland has been beguiling listeners for years in her role as the superlative frontwoman for elastic surf rockers La Luz. Now Cleveland is evolving her sound on the new solo full-length Night of the Worm Moon, a serene album that flows like a warm current while simultaneously wresting open a portal to another dimension. As much a work of California sci-fi as Octavia Butler’s Parable novels, Night of the Worm Moon incorporates everything from alternate realities to divine celestial bodies. Inspired in part by one of her musical idols, the Afro-futurist visionary Sun Ra (the album’s title is a tip of the hat to his 1970 release Night of the Purple Moon), the record blends pastoral folk with cosmic concerns.

But whereas that album was internal and contemplative, Night of the Worm Moon occupies a different, vibrant kind of headspace. UFO sightings, insect carcasses, and twilight dimensions are all grist for Cleveland’s restless creativity, and they and other inspirations collide beautifully on the album’s 10 kaleidoscopic tracks--a spacebound transmission from America’s weirdo frontier.

Javi says: ‘Night of the Worm Moon’ is as much an album of acoustic lullabies as it is of shifting ethereal nightmares - and it’s this balance between the beautiful and the unnerving which allows Shana Cleveland’s ruminations on sleep, love, and identity to be so beguiling.
“Don’t Let Me Sleep” pulls us gently into this nocturnal world full of harps, zithers, vibraphones and lutes before second track and album highlight “Face of the Sun” trembles in, lilting between Latin guitar rhythms and wailing slide guitar. There are such nods to spaghetti western soundtracks throughout the album, in both the instrumentation and the slow, trundling tempo of tracks like “Solar Creep” and masterful “Invisible When The Sun Leaves”.
That’s not to say the album is a wholly analogue affair, though - the synth bass and eerie affected whistles of “The Fireball” are just as poignant as the more stripped back moments. At times the bass sounds like it’s going to swallow the song whole, lending a sense of intense anxiety to the proceedings, sucking the listener in.
If La Luz are the sound of bright summer days spent surfing and swimming in the sun, then ‘Night of the Worm Moon’ - the debut solo offering by frontwoman Shana Cleveland - shows us a parallel world that only appears once the sun has set and the stars have taken its place in the sky. From the first tender plucks to the final twilit twinkles, Cleveland has crafted an album as warm as it is melancholy, and as intimate as it is intoxicating.