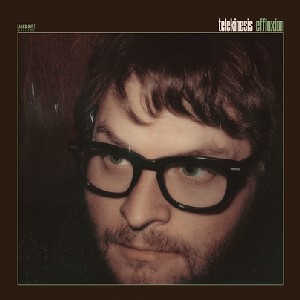 If Michael Benjamin Lerner has given us nothing more than an opportunity to nudge the word “effluxion” into the common vernacular, it is still a crowning cultural achievement. But he has given us much more than that. The fifth fulllength album he’s recorded as Telekinesis is perfect, unfussy power pop— romantic and hopeful and skittish and fresh and familiar, with hooks in all the
right places. He called the album Effluxion because he too found the word a little alien when he first heard it in passing, but it also captured the spirit in which the album was made. After Lerner largely traded guitars and drums for moodier synthesizers and drum machines on 2015’s Ad Infinitum—more OMD than GBV—Scottish indie-pop gods Teenage Fanclub invited Lerner on board as a touring member in 2017.

In addition to this being genie-lamp wish fulfillment for a devoted acolyte, playing those songs every night with his heroes brought him back to known pleasures. Effluxion is a back-to-basics album—not just in its reaffirmation of the sound and style that made Lerner an indie wunderkind a decade ago at age 22, but in the way it was created. Using the same now-discontinued MacBook microphone he used to record his earliest tracks, he holed up in the basement of his West Seattle home and put the album together piece by piece over the past two years, playing every instrument. While previous albums had former Death Cab for Cutie guitarist Chris Walla—who discovered and championed Telekinesis’ demos—and Spoon’s Jim Eno serving as producers and sounding boards and sidemen and general voices of authority and experience, Lerner wanted to do this one entirely on his own.