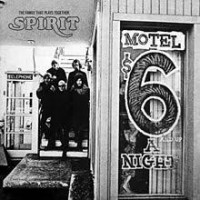 The Family That Plays Together is Spirit’s second album released in 1968, on which the group combined Jazz, Rock and even Classical elements. The A side’s six songs are strung together into a seamless 20-minute suite, starting with the catchy hit song “I Got A Line On You”. Clever harmonies, a multitude of instruments and intricate vocal arrangements result in an absolute landmark Sixties rock album. For those who have not given this legendary band a chance, it is worthwhile to do so.

This ground-breaking band from Los Angeles had Led Zeppelin open up for them when Led Zep went out on their first U.S. tour, where they struck up a mutual friendship. And Spirit’s guitarist and main songwriter, Randy California, played in a band with Jimi Hendrix in ‘66. For those of you who were wondering, Spirit is the band that Led Zeppelin allegedly ‘borrowed’ the riff of “Stairway To Heaven” from (check out the Spirit song “Taurus” from their eponymous first album and decide for yourself).

The Family That Plays Together is available as a limited edition of 1.000 copies on silver vinyl.

The AvalanchesSince I Left You