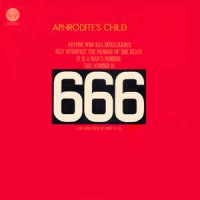 Aphrodite’s Child last album 666 is a masterpiece and their most critically acclaimed album. It took more than a year to finish, and by the time it was released, in 1972, the band had already split up. The psychedelic atmosphere of their early work in combination with their search through new music territories are done well. This true classic became recognized as one of the most important efforts in early progressive rock. The three band members showing their variety and the little twists they putted in the songs. Greek influences playing an important role in the long jams and greater use of electronic keyboards, studio experimentation and expanded instrumentation.

666 is an odyssey through the realms of progressive music and one where all their talents ultimately blended together.