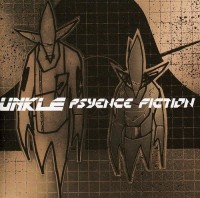 Debut 1998 album from UNKLE, back then a production duo of Mo' Wax head honcho James Lavelle and beat builder extraordinaire DJ Shadow. The soundscape of sampled breaks and ominous soundscapes is pretty similar to "Endtroducing", but with one big difference; "Psyence Fiction" has a line-up of guest vocalists. These included Badly Drawn Boy, Richard Ashcroft and Thom Yorke for the indie kids and Kool G Rap, Latyrx and Beastie's Mike D for the hip hop heads, all adding their own unique edge to the tracks they appear on. Dark, moody and brooding, the album is a 90s essential. After the recent Man From Mo'Wax generated a pre-Bros buzz, this one's been on everyone's wantlist.