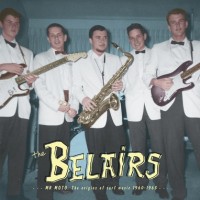 The story of The Belairs started in 1959 in Southern California, more precisely in South Bay, Los Angeles. The first line-up consisted of Eddie Bertrand (guitar), Paul Johnson (guitar), Chas Stuart (saxophone), Richard Delvy (drums) and Jim Roberts (piano). They were descendant of the Bohemian tradition of the Beatnik culture, which was, musically speaking, more attuned with the cool jazz than the nascent rock & roll.

At the time, surf music (or surf culture in general) was on its first steps: surf boards, flirting with the girls, dancing in the ballrooms, the love of cars, cruising the boulevards... Instrumental music fusing early rock & roll with Middle Eastern, Mexican and Hawaiian rootsy touches was the order of the day. Playing melodic fast scales and dealing closely with the use of reverb, it was a truly innovative sound. Artists such as Dick Dale, The Ventures and Duane Eddy hit the venues and airwaves.

In this context, in the first months of 1960, the two school kids Eddie Bertrand and Paul Johnson were giving birth to their trademark dual guitar sound and propelling each other’s instruments in rhythm and dialogue. Creating a unique sound to make their strings “reverberate”, the duo composed their first songs.

The band signed with a label called Arvee, which put out the superb single ‘Mr Moto’ in 1961, an instrumental surf rock song with a flamenco-inspired intro backed by ‘Little Brown Jug’, a jazzy-rock & roller-swing marked by reverbing guitars on the flip side. Their sound didn’t have – at least during their first phase – a bass player. For one reason or another, the bass-less structure worked very well in their favour, giving a special character to all the guitar nuances. They also considered using vocals, but it never happened properly.

Their short and successful career (not exactly in terms of ground-breaking sales but in opening all doors for other surf sound groups and packing up venues up to their roof) was destined to produce only one more official single, however with a different line up. Their second 45, ‘Volcanic Action’ / ‘Runaway’ (included here), was not even officially released – apart from a number of promotional copies. Then, the band had some line-up changes, including – for the first time – a bass player named Steve Lotto, and new members like the drummer Dickie Dodd and the guitarist Art Fisher.

The LP includes four tracks from a recording session at Gold Star studios in Hollywood which took place while The Belairs were without a record label. Songs like the propulsive ‘Chiflado’ (featuring the services of bass player Steve Lotto and lovely sax flourishes by Chaz Stuart), the very danceable rock & roll ‘Duck Waddle’, the swinging jazzy ‘The Shimmy’ and the hypnotic ‘Squad Car’ (with fantastic “siren” counterpoints made by Chaz blowing his saxophone mouthpiece) prove the quality of the band’s repertoire.

Then, late in ‘63, the instrumental fever gave its way to the explosion of the vocal surf music and the glories and success of the Beach Boys, Jan & Dean, The Trashmen, The Rivieras, The Challengers (who featured Paul Johnson plus Richard Delvy and Art Fisher, two other Belairs) and even more popsters such as Annette Funicello, Frankie Avalon and Fabian mixing the surf aura in a more pop and commercial approach.

Curiously, Johnson was invited to be part of The Beach Boys, but he declined the offer. He stayed firm with his convictions and unique sound surf waves. In a short reflection he concludes: “It is very gratifying to be remembered for my tunes and performances, etc. I am also very happy to see that the genre carries on with so many excellent new bands, and that the music is continuing to evolve”.