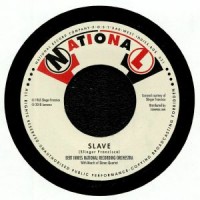 “Slave” is a dark instrumental of Sparrow’s “The Slave” from 1963 by Bert Inniss National Recording Orchestra with backing vocals by March of Dimes Quartet. It was the first release on the National label, which would become Sparrow’s home from 1963 to 1967; Spicy, rhythmic, mournful, classic, full of emotions.

“The Slave” was taken from the same title album released in 1963. This album marks a new era in the matchless career of Sparrow. He could not have launched his National Recording Company on a higher note. “The Slave” is a gem of composition and one of the most memorable works created by a calypsonian in this generation. Maybe it will remain historically significant in the traditional musical development of Trinidad & Tobago for generations. The song is a scathing telling of the fate of slaves in Britain's West Indian colonies. If you've ever wondered where calypso came from this song will tell you. You can actually feel the emotions of the Slaves being expressed in this great Calypso. The genius Mighty Sparrow has taken us back to the plantations so that we can get a front seat view of the hardships of slavery. This narration in song is a must for all students of history in Trinidad & Tobago.

Many of the world's great craftsmen have, at one time or another, created works which were not entirely free from flaws. An astonishing exception in this respect is the greatest calypsonian Mighty Sparrow. From the day he skyrocketed to fame with his composition “Jean And Dinah” in 1956, Slinger Francisco has not made a weak calypso. All of his long-play records have been best-sellers throughout the Caribbean, in the United Kingdom, the United States and even in Europe.