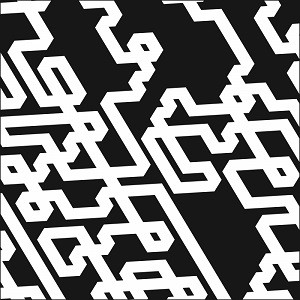 Wow! Always a big fanfare when shop legend big bad Roddie M (Rod Modell to the less acquainted) and partner in crime Steve Hitchel fire up their cv313 moniker. An impeccable catalogue graces these bona fide dub-tech legends' legacies, whether it's as Deepchord, Shorelights, Intrusion, Radius or any of the other aliases they've used over their highly prolific and inspired career. Moonlighting here on Minimood (they usually reserve output for their Detroit label Echospace, we get five tracks executed in their completely inimitable style. Fathoms deep, sweeping textures, ethereal winds and a steady heartbeat - all the hallmarks of a cv313 outing...

The five expansive recordings that make up the album are actually based on live recordings from a DEMF aftershow night back in 2000 in Detroit. 'The music is a bit creepy and so was the experience of this live show' says Stephen Hitchell, 'It was an old dingy warehouse about 10 miles out of downtown Detroit, right next to the now abandoned Eloise asylum, but there are many stories of it still being haunted'. Indeed, that theme of haunted locations around Detroit echoes through the five tracks and makes them a truly cinematic experience.

Opening things up on the first record is the brilliant, "Belle Isle Symphonics", twelve frosty minutes of hunched-over drums and rattling metallic sounds that place you in the centre of a large abandoned building. Crackling static and sharp shards of analogue synth cascading through a pulsating groove and locking you into a mesmerizing stasis.

"Masonic Mystic" reduces things down to a simple heartbeat suspended on glassy, reflective waters. Bobbing in the middle of crystalline ocean you can hear your own pulse and the solar winds from a thousand galaxies circling in the heavens. It's solitary, almost isolated, but somehow manages to revel in this lonely and expansive space - sinking you into a state of aquatic meditation.

On the second record the superb "Stars Above Elmwood" lifts the shadowy mood somewhat with more a crisp, airy and spacious groove; delicate shakers, pensive soft-chords and flurries of delay occupying a deep space vacuum in which you could get truly lost. A track that'd no-doubt have profound results if mixed with popular disassociate drugs!

"Two Way Inn" continues the trip in fine style with gentle chords and barely-there drums. A grandiose vastness encompasses the track, like you're sat on top of a huge canyon rushing off clean MDMA whilst a huge outdoor rave takes place beneath you, looking like tiny little ants.

Concluding, "Eloise's Theme" arrives, an ambient slice of sonic, space drift wood on which to float off down your favourite black hole. Its cv313 as we know and love them and is sure to become a cherished entry to the impressive discography.