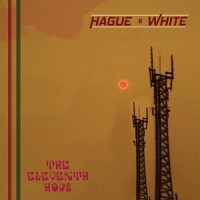 Hague & White are Sheffield musicians Chris Hague (guitars, pianos and backing vocals) and Joel White (lead vocals, Hammond organ, Wurlitzer and Rhodes pianos – who also happens to be the cousin of the bard of Sheffield, Richard Hawley) who, between them, have worked with artists including Pulp, Moloko and Finlay Quaye. The band is completed by legendary drummer and percussionist, former Weller sticksman, Steve White. These three very talented musicians have created a self-assured, sophisticated and breathtaking debut album.

The Eleventh Hour was recorded at Sheffield’s Tesla Studio, produced by Chris and David Glover (with co-production from Joel), and mastered at Abbey Road. It encompasses various styles and moods, touching on the band’s love of soul, jazz, funk, psych and garage. With a sound hard to define, the eclecticism of Hague & White has been compared to anything from the sounds of Acid Jazz, to bands such as Elbow and The Last Shadow Puppets.

Album opener Distant Relative tackles the issue of mental health within a family, soundtracked by an atmospheric arrangement and breezy harmonies. Elsewhere songs such as Stranger To Your Love and first single Just Be True are upbeat pop numbers filled with instantly memorable hooks and melodies.

Over a slice of ‘60s garage, What Ya Gonna Do Now drives home the message to keep on keepin’ on in the face of adversity, whilst I Thought I continues this sentiment over a soulful romp. The groove continues apace on Put Me Where You Want Me, an anti-hero song, recognising that we sometimes need other people and we can’t do it all by ourselves.

The penultimate track on the album is the exquisite Don’t Hurt, a positive song about rescuing someone from a past abusive relationship. The album culminates with title track The Eleventh Hour, which asks philosophical questions of the time we have here on earth, full of social and political comment. It’s a song that showcases the band’s deep love of the type of ‘message music’ so common in the work of artists such as Marvin Gaye, Stevie Wonder and Curtis Mayfield.

SocietyAll That We Have Become