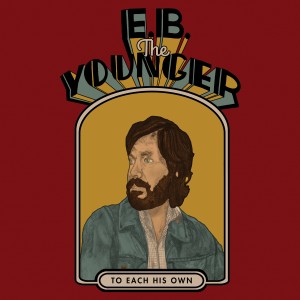 “What came before you is why you’re here now,” declares the man born Eric Brandon Pulido. “So embrace both the past and the present.”

The current frontman of Texan legends Midlake embraces both past and present times for his glorious debut solo album, To Each His Own, under his new enigmatic alias E.B. The Younger. It’s a deeply personal record, rooted in Pulido’s love of warm, glowing rock, folk and country hues that came of age in the 1970s woven with contemporary recalibrations: guitars ripple, sigh and sizzle alongside gliding keyboards over crisp, choppy and becalmed rhythms. Pulido’s lyrics equally look back and forth, philosophising about his place in the world, the choices he’s made, and where they have taken him.

Or, as he describes To Each His Own, “an eleven-song journey through the life and times of a wayward Midlaker seeking to find purpose in an uncharted land. Will he find his way? Listen, and ye shall find.”

Pulido’s “wayward” phase began in 2014 with a break from Midlake, “to invest time in kids and musical projects less physically demanding”, he says. His first project was the transatlantic collective BNQT, a self-described ‘poor man’s Travelling Wilburys’ featuring Pulido, Ben Bridwell (Band of Horses), Fran Healy (Travis), Jason Lytle (Granddaddy) and Alex Kapranos (Franz Ferdinand) who recorded the 2017 album BNQT – Volume 1. But To Each His Own is all Pulido – or rather, E.B. The Younger.

“It’s an antiquated way of naming a younger member of a family,” he explains. “I’m expressing, simply, that something greater came before me. It’s countering the idea in today’s culture that everything revolves around ourselves, that we’re the most important thing in the world. I feel that humility is a lost virtue – you only have to look at America’s current leader - which I want this record to represent. Honesty, empathy, love.”

In this case, honesty begins at home. Solo debutantes typically distance themselves from their musical past, but Pulido freely acknowledges Midlake’s presence on To Each His Own, from the three Midlakers in his backing band to an album title that stems from his memories of band discussions.

Says Pulido: “It’s very common in bands to have artistic differences, and we were no exception. Saying ‘To each his own’ was almost a way to collectively acquiesce and move forward when differences would arise. It’s OK that we feel differently, because both opinions are valid. The phrase is also about me doing something on my own, a statement that it’s OK to define who you are outside of what has defined you before.”

players. Bedford is also the album’s principal producer, while studio engineer and Centromatic drummer Matt Pence acted as the overarching producer, alongside Pulido, as well as adding percussion and occasional drums.

As Pulido explains, “Midlake self-produced and recorded everything, but as with BNQT, I wanted to embrace collaboration. I’d present songs with just voice and acoustic guitar and ask the musicians where they heard things going, and so we built the songs up organically.”

Within that organic build, Pulido still had specific ideas in mind. He singles out the late, great Harry Nilsson as a key influence. “Midlake songs were often cerebral and minor-key and I wanted some of mine to be more playful and buoyant and major key, which Harry did so well, while still making deep, thoughtful music.”

Pulido also hears traces of The Eagles, Cat Stevens, Joni Mitchell, Wings and CS&N in To Each His Own, plus an “eighties vibe” to the record’s freewheeling lead single ‘Used To Be’, inspired by The Last Waltz, the film documentary about Pulido’s all-time favourites, The Band. As he recalls, “The guys are sitting backstage playing ‘Old Time Religion’, and Robbie Robertson says, ‘It’s not like it used to be!’, which has always stuck with me. But it’s OK by me that it’s not like it used to be. Embrace where you’re at, and look forward. Be both the old and the young.”

The Old and The Young is a familiar concept to Midlake fans, as a songtitle from the band’s last album Antiphon. In one sense, ‘The Young’ are also represented here by Conrad Lee Pulido, Eric’s three-year-old son, whose uninhibited dancing to calypso rhythms (from Harry Belafonte and Nilsson tracks) inspires the carefree Tropicália of ‘CLP’. A similarly summery vibe energises ‘On An Island’, inspired by an artist retreat (on the island of Nantucket) where Pulido, “focused on, and finished, several of the songs for the album.” But again Pulido finds a double meaning: “To be an island means you don’t live or march to the beat of anyone else’s drum.”

Self-determination also defines the sumptuous, soft-rocking “When The Time Comes” where Pulido gently mocks himself as the so-called ‘artist’ who chose to “follow the dream” but without any guarantee of job security or a pension. Moreover, the exquisite ‘Hope Arrives’ recognises that making art typically involves self-doubt, as Midlake experienced. As Pulido recalls, “I felt that fear controlled the obstacles that existed for the band. But when hope arrives, fear will disappear, and peace will come.”

Midlake also figure in the acoustic, sparse ‘Monterey’, named after the Californian idyll where the band played their last show to date, after which Pulido suggested a break would benefit all: to step off the merry-go-round for a while after riding it together for 15 years. “I said, we’ll pick things back up if and when it makes sense to everyone, trust me,” he recalls. “And I was at peace with our decision.”

The closing title track emanates a palpable sense of peace while crystalising Pulido’s past-present/old-young mindset: “I’ve been about all alone / I’ve never felt so good before… And what we did before / No I do not ignore”. With a new BNQT album in the works and, if all goes to plan, a Midlake album to follow, Pulido is already looking forward. But his present is E.B The Younger, and his effortlessly melodic, gorgeous songs invested with honesty, empathy and love. Listen, and ye shall find.

Barry says: Half way between poppy Americana and folky Indie, Pulido is more than capable of penning an effective tune, with richly textured acoustic instrumental backdrops forming the perfect base layer for his unmistakeable vocal talents. Warm, rich and beautifully immersive.