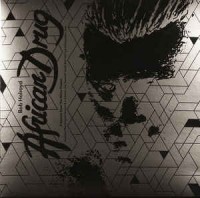 Bob Holroyd's spiritual house zenith, "African Drug" reworked by Joe Claussell and originally released in 1994 on Sacred Rhythm - back for a limited period only.

The original, full of gamelans and ethnic perc is in itself quite ahead of its time, foreseeing the obsession with slow, tribal rhythms that the new EBM and Dusseldorf mob now seem to be reveling in. Amongst the backdrop of uptempo funky house, proggy techno and jungle, this slow, hypnotic number may have seemed somewhat out of place in the mid 90s! Joaquin's 'Hallucinatory' version is a drawn out druggy epic, full of rhythmic nuances, growling bass notes and tribal vocal chants that again, seems to have predicted its resurfacing now, in 2018, and sounding more relevant than ever. Anyone fetishizing over Tolouse Low Trax or the Sued crew (PG Sounds, SW, SVN) just needs to buy this and play it on -8%!! A voodoo masterpiece - don't miss out on your copy this time round!