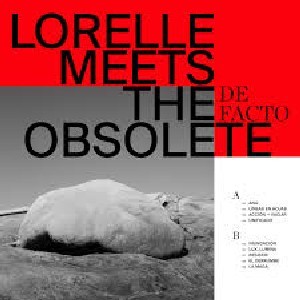 Mexican duo Lorelle Meets The Obsolete release their new album De Facto on January 11, 2019. The album, their fifth, was recorded at their home studio in Ensenada, Baja California, mixed by Cooper Crain (of Cave and Bitchin Bajas) and mastered by Mikey Young (of Eddy Current Suppression Ring and Total Control). It’s easily their best and most coherent album to date, and also the one that fully explores the outer limits of their sound. “There was a conscious desire to push further with what we were doing,” says The Obsolete, aka Alberto González. “One of our rules for this album was to go all in without middle grounds in terms of what we wanted the songs to be. We were committed to developing ideas that made our heads go ‘POW!’ from the beginning.” The end result is somewhere between the brave experimentation of the new Low album, Double Negative, and Tender Buttons-era Broadcast put through a heavy psych filter. There are pure pop songs that come across like lost ’60s nuggets (‘Linéas En Hojas’), blistering white noise jams (‘Unificado’) and meditative incantations (‘La Maga’) – all of which will, indeed, make heads go ‘POW!’

Martin says: Perhaps the best thing anyone can do with a legacy is build on it. A change of scene certainly helps to avoid getting stuck in the ever diminishing returns of routine, churning out the same result every time, but with ever less inspiration. So when Lorelle Meets The Obsolete swapped the sprawling chaos of Mexico City for the wide open Baja peninsula, Mexico’s remaining bit of California, it turned out to be a very smart move. The formal inclusion of members of their live band, drummer Andrea Davi, José Orozco on synthesizer and bassist Fernando Nuti, into the creative process broadened the sonic palette still more, with the net result that their fifth album, often a marker by which time only diehards have maintained any interest, is their most fully realised and beautiful to date.
It’s not as if they’ve abandoned their past mind. Wigout wildness is still very much to the fore in “Unificado”, for example, but change is apparent after the crawling menace of album opener “Ana”. “Líneas en Hojas” introduces itself with a bassline on the verge of breaking into “Billie Jean”, gritty guitar lines and pretty distorted vocals before a bright, clear chorus sends a shaft of light and warmth through the clouds. Perhaps the album’s highlight however is the mesmerising “La Maga”, where the gentle rolling shimmer of the opening three minutes shifts into a drifting, sunset glide of undulating keyboards and repeating guitars that build softly on...and on...

Shana ClevelandNight Of The Worm Moon