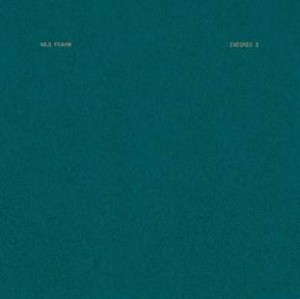 While Encores 1 focused on an acoustic pallet of sounds with just a solo piano and harmonium, Encores 2 explores a more ambient landscape from the All Melody sessions, the pinnacle of which is the astral 12 minute showpiece Spells. Recorded through an amplified stone well Frahm found on Mallorca, Encores 2 is at once unique but familiar; orbiting the universe of All Melody while inhabiting its own world.

“The idea behind Encores is one we had from before All Melody; to separate releases each with their own distinct musical style and theme, perhaps even as a triple album. But All Melody became larger than itself and took over any initial concepts. I think the idea of Encores is like musical islands that compliment All Melody”

Barry says: A beautiful counterfoil to last years' 'Encores 1', we get a wealth of beautifully textured field recordings, icy and crepuscular loops bolstered with beautifully weighted and perfectly paced piano, as is Frahm's style. Encompassing elements of dark ambient and minimalism, this is further evidence of Frahm's domination of the modern classical field, and it shows no sign of slowing down. Lovely stuff.