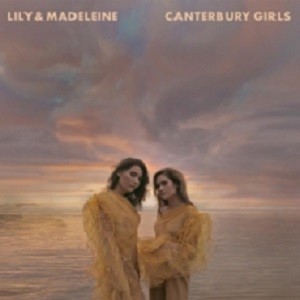 Lily and Madeleine Jurkiewicz create candid music with deep emotional and personal resonance. The sisters, who record under the moniker Lily & Madeleine, boldly explore what it means to be women in the 21st Century and aren’t afraid to use their music to call out injustice or double standards. This fearless approach has permeated their three albums, which are full of insightful lyrics and thoughtful indie-pop.

With their fourth studio album, ‘Canterbury Girls’, named after Canterbury Park, located in their hometown of Indianapolis, the sisters are coming into their own as women and musicians. Using an eclectic playlist of songs as sonic inspirations - soul tunes and waltzes, as well as cuts from Midlake, ABBA and Nancy Wilson - Lily & Madeleine worked quickly, recording ‘Canterbury Girls’ in just 10 days.

Although the record contains plenty of Lily & Madeleine’s usual ornate music - including the languid ‘Analog Love’, on which twangy guitars curl around like a kite twisting in the wind - the album also finds the siblings exploring new sonic vistas. ‘Supernatural Sadness’ is an irresistible slice of bubbly, easy-going disco-pop; the urgent ‘Pachinko Song’ hews toward interstellar synth-pop with driving rhythms and ‘Can’t Help The Way I Feel’ is an effervescent, Motowninflected number.

Vocally, the sisters also take giant leaps forward. The dreamy waltz ‘Self Care’ is a rich, piano-heavy track on which their voices intertwine for soulful harmonies, while the meticulous ‘Just Do It’ has a throwback 70s R&B vibe. “This is the first record Lily and I have ever done where we have full control over all of the songwriting,” says Madeleine. “We did co-write with some people that we really love. But everything on this record is completely ours. I feel like I have full ownership over it, and that makes me feel very strong and independent.” With this growing self-confidence and musical poise, it’s clear that Lily & Madeleine are positioned for even greater things going forward.

Barry says: Lil & Mads' last outing, 'Keep It Together' was a big hit in the shop, and their latest, 'Canterbury Girls' will surely meet the same reception. Slightly more upbeat this time around, we get an infectious smattering of neo-soul, shimmering synth-pop and even the odd inkling of classic-rock melodies and the ever-present addictive two-part harmonies we've come to know and love. Beautiful stuff.