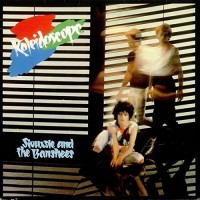 UMC are proud to announce the final batch of Siouxsie and the Banshees vinyl reissues. Remastered from the original ¼” tapes and cut at half speed at Abbey Road studios, London. Both artwork and audio have personally been overseen and orchestrated by Siouxsie Sioux and Steven Severin.

The Banshees’ third studio album landed in summer 1980 and introduced two new members ‘Budgie’ on drums and ‘McGeoch’ on guitar. Kaleidoscope would give the group their first hit album peaking at No’5 in the charts. Hits such as ‘Happy House’ and ‘Christine’ are atmospheric and dripping with sarcasm, the album swirls with synths and programmed drum loops for the first time.

Siouxsie And The BansheesPeepshow - 2018 Vinyl Reissue

Siouxsie And The BansheesHyæna - 2018 Vinyl Reissue

Siouxsie & The BansheesA Kiss In The Dreamhouse - 2018 Reissue