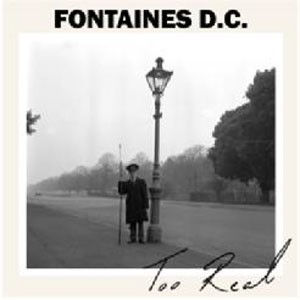 Partisan Records are proud to release the upcoming 7” from Fontaines D.C., titled ‘Too Real’. Fontaines D.C. met as a quintet in Dublin, influenced and driven in equal measure by the rich history of their hometown’s counter-culture, their response has been to make concise and immediately authentic indie punk that has done anything but fall on deaf ears.

The last six months have seen Fontaines D.C. release three hotly received double A-side singles, both of which were named as Single Of The Week by many retailers and garnered early support from the likes of Steve Lamacq and others on 6 Music, as well as earning feature space from every major Irish publication. Similarly, the band have played a number of shows across Europe, Ireland and the UK earning a reputation for their brooding and trenchant live performances, supporting the likes of The Horrors, Girl Band and The Lemon Twigs, as well as playing festival slots at Electric Picnic, Hard Working Class Heroes and Other Voices.

Previous singles such as ‘Liberty Belle’, ‘Hurricane Laughter’ and ‘Chequeless Reckless’ call to mind the likes of the Modern Lovers, The Fall, Iggy Pop and The Strokes, seamlessly blending immediate lyrical hooks with melodic golden-era indie instrumentation and 70s Stooges punk thrust, all of which is strewn with defiant rock and roll overtones.

“The energy, the urgency and the emotion of these brilliant new songs made me stand up and take notice that this is the band I’ve been waiting for” - John Richards (KEXP, Seattle)

Too Real
The Cuckoo Is A-Callin’