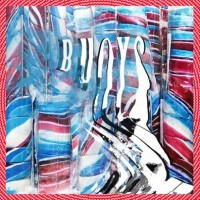 Noah Lennox's sixth solo album as Panda Bear is Buoys. The first song to be released from Buoys is “Dolphin”: Lennox’s bright, sincere voice front and center, with miles of space surrounding it, a guitar and some textured samples fleshing out the dubby sparseness and undercurrent of speaker-limit-pushing sub-bass low-end. Buoys was co-produced and co-mixed by collaborator Rusty Santos in Lennox’s adopted home of Lisbon, Portugal. Lennox and Santos last collaborated on the landmark Panda Bear album Person Pitch, which had its 10-year anniversary last year.

Animated by their ongoing interest in contemporary music production techniques, Lennox and Santos envisioned something that would “feel familiar to a young person’s ears.” However, Buoys retains a deep layer of experimentation coursing through the hyper-modern production – a hallmark of Panda Bear releases that will feel intimately familiar to fans of Lennox’s decade-plus body of work.

Alongside Santos, Buoys also features collaborators in Chilean DJ/vocalist Lizz and Portuguese musician Dino D'Santiago, both artists who came to Lennox via Santos’ recent trap and reggaeton production work; the former contributes arrangements throughout the album including “Dolphin,” and both lend their vocals to “Inner Monologue."

Buoys is the first Panda Bear release since 2018's vinyl-only EP A Day With the Homies, and the follow-up to 2015's kaleidoscopic full-length Panda Bear Meets the Grim Reaper. "The last three records felt like a chapter to me, and this feels like the beginning of something new," says Lennox whilst surveying how Buoys relates to the estimable Panda Bear catalogue. Indeed, the forthcoming Buoys is full of fresh ideas from one of modern music's most fascinating, innovative, and emotionally generous artists.

Barry says: Having always been the more electronic side of the musical monolith that is Animal Collective, Panda Bear clearly brings the off-kilter melodies and syncopated Books-esque loop manipulation, with 'Buoys' proving to be every bit the staggered and echo-laden monolith we'd expect. Comfortingly avant-garde without stepping too far into art-rock or ostracising the listener, buoys takes a while to reel you in but when it does, you're stuck for good.